Click the menu icon below to learn more about other foot and lower leg conditions.

Metatarsalgia (Meta-tars-al-gia) is a catch-all term associated with injuries to the forefoot.

Often associated with the feeling of a stone in your shoe, or your sock bunched up; A pinch, zapping or sharp sensation.

Most commonly the irritation occurs between the 3rd and 4th metatarsal; but can also affect the other metatarsals as well. 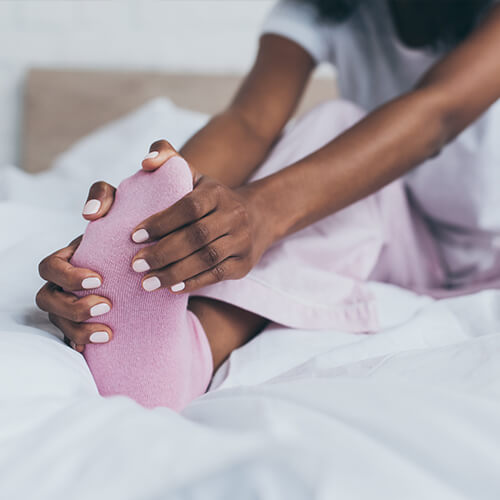 A condition in which the ligaments that surround the joints at the base of the toes (forming a “capsule”, and help the joints function properly) have become inflamed. This inflammation causes considerable discomfort and if left untreated, can eventually lead to a weakening of the surrounding ligaments which can cause dislocation of the toe.

Certain risk factors that may aggravate the MTP joint capsule are:

– Abnormal foot mechanics combined with repetitive foot motion that applies pressure on the ball of foot.
– Tight or stiff calf muscles
– A second toe that is longer than your first toe
– Chronic use of ill-fitting footwear (such as tapering toe-box or high heels)
– Progression of Hallux Valgus (deviation of the big toe)

Synovitis is the inflammation of tissues that line a joint causing increased fluid in the joint and even joint instability.

Synovitis is commonly associated with specific diseases such as arthritis or gout, but may also be the result of overuse or trauma.

Symptoms of Synovitis may include redness, swelling, warmth, and pain with joint motion.

MTP Synovitis frequently produces: sharp aching pain that is most pronounced along the ball of the foot. The pain is usually suggestive of an ongoing disease process and usually involves the second metatarsophalangeal joint.

The most common cause of MTP synovitis is repetitive stress on the metatarsophalangeal joint that results in persistent inflammation and resulting degeneration of tissues and ligaments that support the base of toes. The stress is increased when the pressure on the ball of foot increases.

Some signs that are strongly suggestive of MTP Synovitis are:

Common factors that may increase the risk of developing MTP Synovitis are:

– Wearing high heels
– History of congenital or acquired lesions of the foot; such as bunions or an unusually long second toe
– Dropped medial (inside) and MTP arches of the foot
– Rheumatoid arthritis